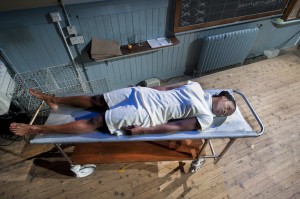 Adura Onashile has been shortlisted in the Best Female Performance category of the Critics’ Awards for Theatre in Scotland for her show HeLa. The results will be announced at a ceremony in Glasgow on 8th June.

A number of new dates for the tour have been confirmed, including the Baltic, Newcastle on 5th June

Adura Onashile’s powerful one woman performance as Henrietta Lacks is currently being seen by audiences all over the world. The tour of HeLa went to India earlier this year and is currently moving between Brazil and Jamaica before returning for dates in Scotland and Birmingham in September. Further dates in New Zealand and North America will be announced later in 2014.

Scroll down in the Current Projects section of producing company Iron-Oxide‘s website for further information or look out for performance listings on sci-stage.com

In the meantime, here is Adura Onashile talking about HeLa during it run at the Summerhall venue at the 2013 Edinburgh Festival Fringe.

As the Edinburgh Festival Fringe enters its final few days there is still a chance to see HeLa, Adura Onashile’s one woman show about the life and legacy of Henrietta Lacks.

When Lacks attended the Johns Hopkins Memorial Hospital for treatment in 1951, a sample of tissue was taken without her knowledge. The now famous HeLa cell-line has played a role in many medical breakthroughs in the decades since.

The evocative wooden-panelled setting of the Old Anatomy Lecture Theatre in Edinburgh’s Summerhall provides a backdrop for this new piece of physical theatre. Adura Onashile’s powerful and versatile performance captivates for the whole hour as the play examines some of the ethical questions surrounding the treatment of the Lacks family and the scientific significance of the HeLa cell-line.

Meanwhile, at the same venue Jack Klaff stars in a 75 minute show about the life of Isaac Newton, first performed the the Gravity Fields Festival in Grantham in 2012.

HeLa, produced by Iron-Oxide, is on daily at 6.45pm at Summerhall, Edinburgh until 25th August 2013. Newton plays at the same venue at 5pm.