Menagerie Theatre’s Ideas Stage programme links writers and scientists in order to create new pieces of theatre. The latest Ideas Stage project will be presented at the Hotbed Festival in Cambridge this weekend.

A House Divided, written by Craig Baxter and video artist Marc Atkinson, is described as “inspired by the work of Professor Emily Holmes and Dr Martina Di Simplicio of the MRC-Cognition and Brain Sciences Unit, Cambridge, on ‘mental imagery’, emotion and the study and treatment of bipolar disorder.”

Craig Baxter’s previous works for Menagerie include Let Newton Be! and Re:Design in conjunction with the Darwin Correspondence Project. His sleep science monologue Somniloquy featured at the 2013 Hotbed Festival.

An early stage presentation of A House Divided will be given at Cambridge Junction at 11am on Sunday 13th July. 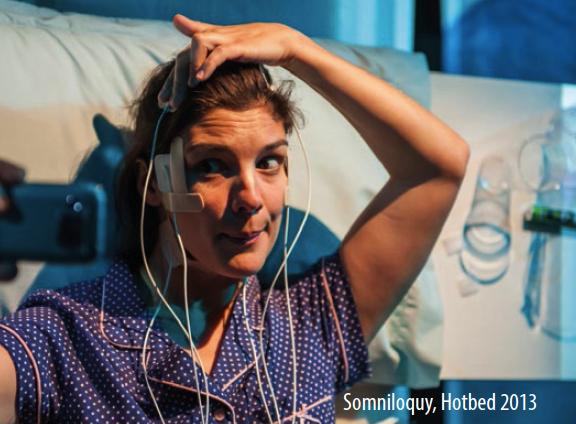 Specially commissioned one act plays, workshops and works-in-progress will feature at venues including the Cambridge Junction and London’s Soho Theatre.

A new project this year – ‘What’s Up Doc?‘  – pairs playwrights with expert thought leaders to produce new writing for the festival. Of particular note is Somniloquy by Craig Baxter, who has written a 20 minute monologue about sleep and its disorders with expert advice from Professor Richard Horner of the University of Toronto. The monologue will be performed by Jasmine Hyde and explores the function of different sleep cycles in the light of latest ideas on the dynamic nature of sleep.

Other new works at this year’s festival include What Did It Feel Like To Go To The Moon? by poet Lucy Sheerman (written in collaboration with Al Worden, command pilot on the 1971 Apllo 15 lunar mission) and an initial glimpse of A Broken Replicate: Altered Skin which looks at processes in genetics through theatre and dance.

will be visiting three new locations during July after opening at its usual home in Cambridge.

Somniloquy will be performed in Cambridge on 12th and 14th July, in Colchester on 19th and 21st July and in London on the 23rd and 26th July.