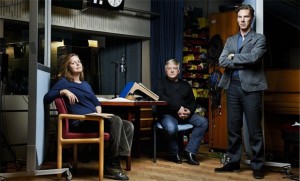 The BBC radio version of Charlotte Jones’ Humble Boy’ is available to listen to online until 28 July 2013. The 2001 play touches on ideas in string theory and cosmology. Although the science itself is not the main theme in Humble Boy, the play is nevertheless quirky and a little absurd in a similar fashion to Friedrich Dürrenmatt’s The Physicists.

The 2007 BBC radio version stars Diana Rigg and Adrian Scarborough and was adapted by Steven Canny.

Just one week on from airing Michael Frayn’s ‘Copenhagen’, Radio 3 will be broadcasting another play featuring physicists – and this time they’re mad. Friedrich Dürrenmatt’s ‘The Physicists’ was first staged in 1962 and was revived at London’s Donmar Warehouse in 2012 to rather mixed reviews. Set in a lunatic asylum, ‘The Physicists’ is less intellectually demanding than ‘Copenhagen’ but the two plays are linked by the sense of a possible nuclear threat. The new BBC Radio 3 version will feature actors Samantha Bond and Geoffrey Whitehead and goes out at 8.30pm on Sunday 20th January 2013.